Potholes and your tyres, Part Two

In Part One of this post, we looked at the size of the pothole problem in the UK and what the little blighters can do to your vehicle. This time, we’ll look at what you should look out for following a pothole encounter, and what you can do if there’s damage. 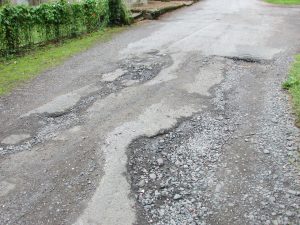 If you’re paranoid about hitting potholes, you’re going to have a tough time. Given that on average, there’s a road defect every 110m, you’re either going to be doing a lot of swerving (not recommended) or a lot of checking. It’s worth remembering that your vehicle and its tyres are pretty tough, and they will shrug off most collisions.

But whilst they’re tough, they’re not indestructible, and the stresses caused by a bad pothole collision can be pretty large.

So the best policy is to use some common sense: if it felt like a bigger-than-usual impact, the ones that are normally accompanied by some swearing, then it’s worth doing some checks afterwards.

Checks after hitting a pothole

First up is a visual check. Make sure there are no bulges in the tyre sidewall or other visible defects. As mentioned in Part One, these can leave the tyre open to a catastrophic failure, so they can’t be ignored.

Check the wheels too. Potholes can cause cosmetic damage, but the more serious problem is the possibility of bends, chips and cracks.  If the wheel has been bent by the impact then it may no longer form an airtight seal against the tire. Chips in the wheel where the rim meets the tire are also bad news, as are cracks in the wheel rim or the spokes. Cracks can be tougher to spot, as they’re often just hairline fractures. Chips and cracks can lead to the wheel failing, so if you’re uncertain what the damage is, get these investigated by a professional as soon as possible.

Other visual checks should include looking for any obvious damage to the vehicle’s body and the exhaust.

Your second check for damage comes from listening, and assessing how the car is handling. Severe impacts with potholes can damage a number of components in the suspension, and signs of this include:

Most people have a good sense of how their car normally feels and sounds, so any of the above means a trip to the garage for further investigation.

Tyresafe and other motoring organisations recommend that you get your alignment checked after a pothole collision.

Can you claim compensation for pothole damage?

If it turns out that your vehicle has been damaged by a pothole, can you make any sort of claim? The short answer is yes, but there are no guarantees that it will be successful.

Local authorities can use a standard – and not unreasonable – defence that if they didn’t know about the pothole, then they had no opportunity to put it right, and therefore they’re not liable. On top of that, you have to be able to prove that the pothole was responsible for the damage. But if this sounds like there’s next to no chance of getting a penny, don’t forget that local authorities do pay out millions each year in compensation.

There is plenty of advice about compensation available online. Take a look at the gov.uk website, the RAC guide or MoneySavingExpert.com. The latter even has templates for letters that you can use.

Should you claim for pothole damage?

However, before you fire off an email about your ruined tyre, it’s perhaps worth thinking about the ethics of pursing claims against cash-strapped local authorities. As money-saving guru Martin Lewis puts it:

Our usual campaigns are about reclaiming money you’ve wrongly paid – not damages, which this guide is about. A compensation culture is dangerous and we need be wary of this, especially when taxpayers are footing the bill.

Yet the authorities have a legal duty to maintain roads so they’re safe for everyone to use. If they don’t and your car’s damaged, they should help pay the costs to repair it…

Even if you are eligible to claim, you have a decision to make. Some argue that compensation deprives authorities of much-needed cash to fix roads – others that the more people pursue their rights, the more incentive there is for authorities to improve the roads to avoid dealing with claims.

We’ll leave you to ponder that one.

Tyres damaged by potholes in Oxfordshire, Berkshire or Buckinghamshire?

If a close encounter of the pothole kind means you need a replacement tyre, don’t forget that we offer one of the best mobile tyre services out there, with competitive prices and stellar reviews for our customer service. Get in touch today.