Brexit, EU labels and your tyres

The EU is planning new rules on tyre labelling and, despite Brexit, the UK government will probably adopt them. We look at why that’s sparked a controversy.

Whatever you think about Brexit, you have to agree with one thing: you can’t get away from it. Theresa, Boris, hard-Brexit, soft-Brexit…it’s the never-ending story and it’s everywhere.

But even we were surprised when we saw the Brexit controversy had invaded the world of tyres.

In a nutshell, here’s the story. The EU is introducing regulations that mean tyres will have to display wet grip, passing noise and fuel efficiency ratings. The UK government is planning to adopt these regulations after we leave the EU.

You’d think that this couldn’t possibly be a big deal, but some people are really in a tizz about it. Take the two headlines below. One is from The Express, the other from Wales Online. 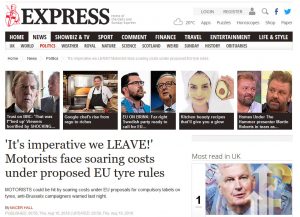 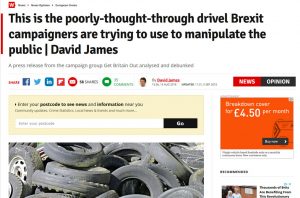 So what can they be getting so worked up about?

Let’s take a look at the objections to the EU legislation.

The objections to adopting new EU tyre labelling have been set out by the pressure group Get Britain Out and reported in newspapers such as The Express. They include the following arguments:

In addition, it’s been argued that that manufacturers will have to spend more money “to meet arbitrary standards for criteria such as road noise.”

However, the proponents of the new EU labels have a rather different view.

Supporters of the new labels claim that the labels simply allow consumers to make more informed buying decisions. According to the European Commission:

Improving the labelling of tyres will give consumers more information on fuel efficiency, safety and noise, allowing them to obtain accurate, relevant and comparable information on those aspects when purchasing tyres.

The claim that tyre costs will cost substantially more has also been disputed. The European Commission says that costs to manufacturers will be ‘moderate.’ What that means isn’t clear, but we’d suggest that it doesn’t sound like £15 per tyre. In addition, an EU spokesman pointed out that consumers could save money by being able to identify the most fuel-efficient tyres,

“Tyres account for up to 10% of the fuel consumption of vehicles. [The proposed changes] will help consumers make significant fuel savings – for example, a household could save up to £112 per car and per year just by using more efficient tyres, such as A class tyres, instead of F class ones.”

What about the view that tyre manufacturers will be unduly burdened by the legislation? The International Tyre Manufacturers Association had this to say:

“ITMA is fully supportive of any measure that improves tyre safety, an objective the introduction the tyre-labelling regulation sought to achieve.

“If that means more can be done to increase motorists’ awareness and understanding of the information on the labels, ITMA will gladly play its part.

“A critical element of the scheme was to inform consumers of the relative value and environmental benefits of the tyres they are considering buying, so they might be able to make an informed purchasing decision.

“Achieving that is essential if further performance ratings are to be added to the labelling, a proposal which ITMA also believes has merit, especially for winter and re-tread tyres.

“Fundamentally, of course, the accurate and consistent assessment of tyre performance is critical and to the benefit of all parties.

“Should viable means to enhancing existing practises be found, ITMA would once again be supportive of such changes.”

To us, that doesn’t sound like the manufacturers have any problems with the proposals.

What do you think?

Although this is an interesting issue, we’re steering well clear of offering any political views! We’d much rather that you did your own research, looked at both sides and came to your own conclusions.

Did you know that BK Tyres gives you the current EU labelling information for each and every tyre we sell? Take a look at our online store and you see it’s all there! Or if you need help in selecting a tyre, just talk to us — we’re more than happy to help.

With thanks to Wales Online and The Express for quotes and screenshots of their web-pages.