Why We All Need to Think More About Tyre Disposal 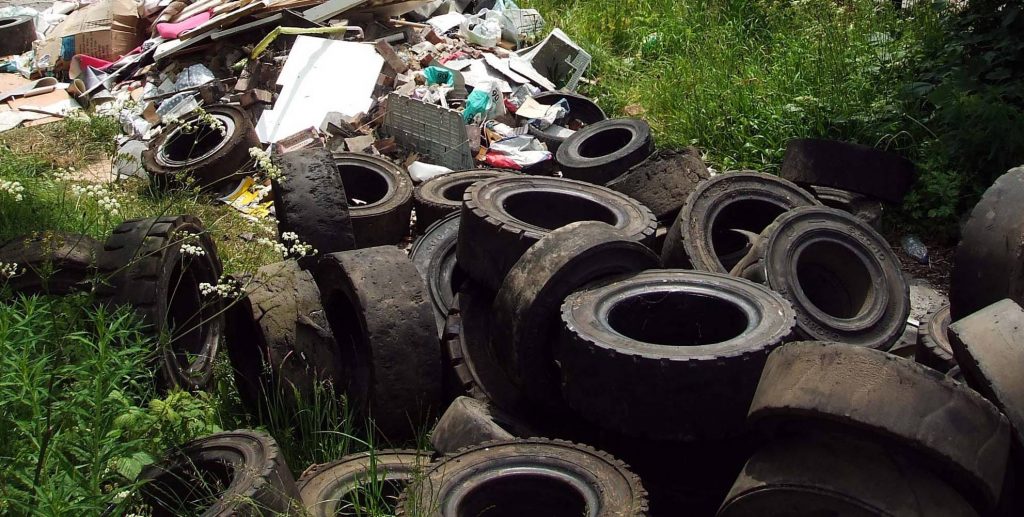 From single-use plastics to climate change, diesel exhaust to species extinctions, environmental issues are now front page news.  It seems that most of us are starting to think more about our impact on the environment.

So it’s strange and depressing to hear the recent news that fly-tipping in the UK has risen by 40% in the last six years. Fly-tipping is a nationwide environmental disaster. Apart from creating eyesores, fly-tipping spreads disease, encourages vermin and releases toxic chemicals.

Used tyres are one of the most frequently fly-tipped items. From Suffolk to Sunderland, councils are faced with clearing large quantities of used tyres. It’s hugely expensive, at a time when many are hard-pressed to meet basic services.

Who is fly-tipping tyres?

At the smaller end of the scale, many waste tyres are dumped by commerical operations that don’t want to pay for proper disposal fees.

At the larger scale, tyre dumping is  linked to organised crime. According to CLA South East Regional Director Robin Edwards:

There are examples here in the South East of fly-tipping on an industrial scale, and this is normally carried out by organised crime units. These units go round taking waste from sites and then dispose of it illegally, expecting private landowners or the taxpayer to foot the bill.

Fly-tipping is illegal, of course, but the problem is catching criminals in the act. Even when they are caught, magistrates seem to be reluctant to hand out serious sentences. This week, it was revealed that in the five years since new guidelines were issued, no one has been given the maximum sentence of £50,000.

However, consumers can help stem the problem in a different way — simply by finding out how their supplier disposes of waste tyres. Credible tyre supply and fitting businesses will have a certificate issued by the Environment Agency. This shows that they are disposing of their waste tyres responsibly.

It’s very easy to check if a tyre supplier (or any other business) has a current waste disposal certificate — you can simply look them up on the agency’s online register.

What happens to your waste tyres?

Any legitimate tyre fitter should be able to assure its customers that their waste tyres will be disposed of in a legal, environmentally responsible way.

For our own company, this means that waste tyres are sent to a local processing plant for shredding or granulating. The disposal company that we use is a member of the Tyre Industry Responsible Recycler Scheme. They repurpose our waste tyres for carpet underlay, road building, all-weather training areas, rubber matting and so on. Some are also used as an environmentally-friendly fuel.

The problem is that some tyre fitters aren’t so choosy about who disposes of their waste. And if their customers don’t show any interest in the issue, the fitting company don’t feel any incentive to pursue the question. But maybe, with consumer pressure, this could change.

Forty years ago, few people thought very much about their waste disposal. Once our waste went in the bin, it was someone else’s responsibility. Today, most of us recycle and there’s a lot of support for reducing waste, including food waste and single-use plastics. So maybe now’s the time to start thinking more about what happens to our waste tyres.

With thanks to Calderdale Council for the use of their image.