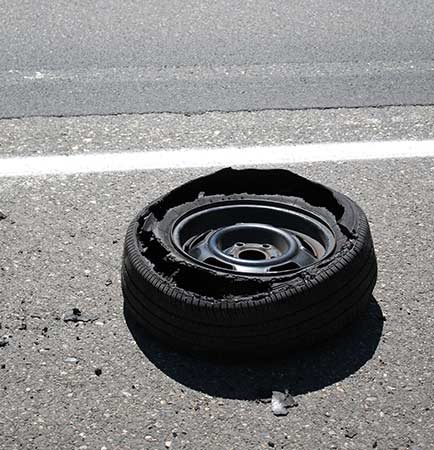 Our post this time is a grim but important reminder of the dangers of old tyres.

A few weeks ago, an inquest in Bristol delivered its verdict on what caused a tragic 2017 motorway crash.  It was due to the failure of an 18 year old tyre.

The incident happened on the northbound carriageway of the M5, between junctions 14 and 15 in South Gloucestershire. A Mercedes van ploughed through the central reservation when its front offside tyre suffered a blowout. The 14.6 tonne converted horsebox collided with two cars travelling in the opposite direction.

Five people died as a result of the crash. Four were killed at the scene; the fifth, Dr Rebecca Mitchell, died seven months later of head injuries she had sustained. One of the cars, a Subaru Forrester, was described as ‘almost unrecognisable’ after the collision.

The blowout was responsible

Police statements at the inquest made it clear that once the blowout had occurred, there was nothing the van’s driver could have done. David Price, the lead accident investigator noted, that the deflation would have been almost instantaneous, and this would have caused the van to veer strongly to the right. The driver couldn’t have stopped this.

Nor were there other factors that contributed to the accident. The van was well within its maximum legal weight and was travelling at 60 mph — the appropriate limit for a vehicle of that size. The driver had no drugs or alcohol in his system and there was no evidence he was distracted by a mobile phone. The weather was clear and the roads were dry.

What caused the blowout?

David Price was clear about the main reason for the tyre’s failure: its age. Although the other tyres on the other vehicle were underinflated, it was unlikely that this had contributed to the accident.

It’s well-known that tyres deteriorate with age. Chemical changes within the tyre’s structure occur as a result of their exposure to air, sunlight, atmospheric pollution and heat. These make the rubber compounds more brittle.

Before the fateful journey, there were few visible signs that the tyre would fail.

The tyre had shown up in an advisory on the van’s MOT, issued six months before the crash. However, vehicle examiner Gary Ford testified that he couldn’t understand why thae advisory had been given. He suggested that the MOT tester may have made a mistake.

Further, Mr Ford noted that although the tyre showed some micro-cracking, this wouldn’t have been evident to a walk-round inspection, which the driver says he carried out before the fatal journey.

Old tyres aren’t illegal (for now), but can be dangerous

The M5 crash shows us just how vulnerable old tyres can be to sudden failure.  The only thing that might have alerted the driver was the tyre’s age. At the time of writing, there is no law in place to prevent old tyres being used on a heavy vehicle.

In November 2018, fourteen month after the crash, the government issued guidance that heavy vehicles should not use tyres more than ten years old. However, no legislation has yet been enacted, because of a lack of research into precisely how fast tyres age.

New research into this is due to be published this month. Will a law follow? Only time will tell.

A reminder for all of us

Most of us would never have cause to drive on an eighteen-year-old tyre. For most drivers, a tyre would have lost its tread long before it reached that age and would have been replaced anyway. But under some circumstances, such as very light usage, it is possible that a vehicle might still be running very old tyres.

This tragic incident is a reminder that regardless of their use, time takes its toll on our tyres.